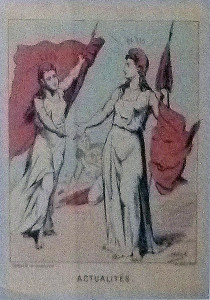 For today’s episode of Another World Is Possible, Norm Diamond celebrates the 150th anniversary of the Paris Commune. In this first of a series, he explores what the Commune stood for, how it differed from the earlier French Revolution, and how it inspired anarchists and Marxists alike. In particular, he looks at the prominent role of women in initiating the Commune and defining its vision and policies.

The music for today’s program comes from the poetry and anthem of the Paris Commune.

Update Required To play the media you will need to either update your browser to a recent version or update your Flash plugin.
Download audio file
Topic tags:
Activism, History, Women