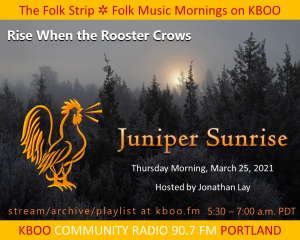 When most people think of Oregon, they are likely to picture the rainy green landscape between the Cascade mountain range and the Pacific Ocean. But if you cross the mountains into Central and Eastern Oregon, you run into a very different landscape, where there is far less rain, and the juniper is king of the trees. This episode of Rise When the Rooster Crows is titled Juniper Sunrise. We’ll head east over the Cascades for songs and tunes of juniper, quail, deer, pines, cowboys, coyotes and more.

Update Required To play the media you will need to either update your browser to a recent version or update your Flash plugin.
Topic tags:
Music, Arts/Culture, History, Immigration, Indigenous
Genre(s):
Folk, Spoken Arts

END_OF_DOCUMENT_TOKEN_TO_BE_REPLACED

Wednesday Talk Radio
Resistance to Lithium mine in Nevada builds