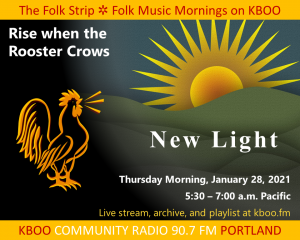 We have a lot of winter ahead of us, but the days are getting longer, and the first blooms of the new year have started to open. This is a season of hope as we emerge from the darkness.  Rise when the Rooster Crows features traditional North American folk music, with its roots, branches, and beyond. In this episode you’ll hear songs and tunes of cowboys, home, labor, crime, whiskey, and the sea. Just for fun, there’s even a version of the sea song “Soon may the Wellerman Come” that’s been getting so much attention lately.

The archived recording of this program starts about 2 minutes after you click the Play button. Click in the timeline to jump ahead or back.