Accomplishments that Oregon protests for racial justice have achieved in the past three weeks: 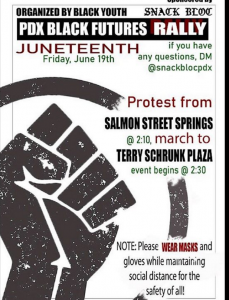 In the State of Oregon:

And this is just the beginning. A list of the current demands of local protest organizers can be found here. Care Not Cops has been working for years on these issues, and has this list of demands.

A comprehensive list of local protests and rallies can be found here.

It is GOOD to see the grassroots is working hard toward police reform and accountability. Now....WHEN will DEMANDS be made to have PUNISHMENTS for law enforcement when murders are done purely off of race...as part of police accountability. Punishments such as LIFE in prison just as a Black person were to get if he/she/they were to also commit such crimes against a police officer for starters. Thanks to ALL for a good start, though! ~Sekoynia