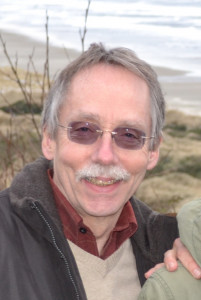 Published date:
Friday, January 13, 2017 - 10:15pm
Get to know our volunteer staff that mix up all of the ingredients necessary to bring you terrific community radio!

1. Please introduce yourself to the KBOO Community-- who are you, and what are you passionate about?

My name is Ray Bodwell, and I’m a relatively recent retiree, having worked in the graphic arts for about 40 years. Gail (my wife) and I moved to Portland from Wilmington, DE in the spring of 2015. We love the Pacific Northwest in general and the city of Portland, in particular.

2. What's your favorite thing to do on a day with no commitments?

Gail and I think of ourselves as “urban hikers” and like to explore the city on foot. We’ve lived all around the country and this is one of the best cities for walkers that we’ve found.

3. What brought you to KBOO?

About six months after moving here, I realized that I had too much free time on my hands. I read about opportunities to get involved at KBOO in the “volunteer” edition of Willamette Week late in 2015, and came to the volunteer orientation in January of 2016. I’ve been a “regular” ever since.

4. What have you done at KBOO?

Initially I was simply responding to the call for volunteers whenever I could. I would help on the clean-up crew, answer the phones during fund-raising, help with set-up at remotes – that kind of thing. After about a month I took the PM News Orientation training and I was hooked. It was a great opportunity to start to learn the technical aspects of radio while also becoming a contributor to the nightly news.

5. What have you learned?

I’ve learned to write for the news, interviewing techniques, sound editing, and board operation. I had the opportunity to learn from Lisa Loving, who was the PM News Director when I started, and I’ve found that the diverse and every changing group of newsroom volunteers are more than willing to share what they know.

6. Are there other things you'd like to do at KBOO in the future?

After I get a little more comfortable at it, I’d like to be a board operator more often. I think that KBOO generates some very good comment, much of which probably has value outside our broadcast area, so I’d like to help expand the web presence. At some point I’d like to give a little back and maybe teach a class on audio editing or news writing.

7. What's your favorite moment at KBOO? Any highlights?

One day in October I was working in the newsroom and heard a Dan Bern song playing. I’m a big fan, and knew the song, but didn’t recognize the recording. I walked back to the studio and saw that he was playing live at the station. He just dropped in to KBOO before heading over to the Old Church for that evening’s performance.

8. How does KBOO help your family/community/etc/?

For one, it gets me out of the house and out from underfoot a couple days a week, and I think that Gail appreciates that. For me, KBOO has helped me to rapidly come up to speed on my adoptive city of Portland, it has introduced me to a diverse group of wonderful people and it has provided me the opportunity to be engaged and learn new things.

9. Why is KBOO important?

If you’ve lived your whole life in Portland, you might not appreciate just how unique KBOO is. It is independent, non-commercial and community oriented. Whether it’s news, public affairs or music, it’s locally produced by volunteers who represent the community that they serve. We can focus on things like social justice, environmentalism, and human rights, and give a voice to people and causes that have little or no visibility in the mainstream media. Neither commercial radio nor the Public Broadcasting Service can say that.

And I think that differentiation is going to become even more important as we brace ourselves for the next four years. If we don’t ban together to fight the madman and his band of greedy, self-serving one percenters, we’re all screwed.

10. What else do you want people to know about you?

I was at the first Woodstock in ’69. If I’d have known in advance that it was going to be the cultural high water mark of my generation, I would have paid more attention . . . or at least held onto some souvenirs.