Monsters of the Market reviewed 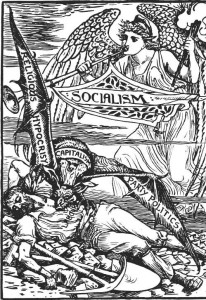 review of David McNally's Monsters of the Market: Zombies, Vampires, and Global Caplitalism

A shorter audio version of this review was broadcast on the January 7, 2013 Old Mole Variety Hour.

Vampires and zombies abound these days in popular culture and in the culture of the market. In 2009, journalist Matt Taibbi famously dubbed the investment bank Goldman Sachs "a great vampire squid wrapped around the face of humanity, relentlessly jamming its blood funnel into anything that smells like money." Some consumers face "zombie debt" that creditors continue to demand long after it has expired or been written off. Regular listeners to the Mole may recall the long history of these metaphorical horrors, including Karl Marx 's description of Capital as "dead labour, that, vampire-like, only lives by sucking living labour, and lives the more, the more labour it sucks." But if capital is vampiric—like the aristocratic Count Dracula with his new property in England—then members of the laboring class are historically associated with zombies. These emerged in Haitian Vodoun, where the zombie is a reanimated corpse, enslaved to a zombie master. In folk culture, peasants have sometimes explained their wealthier neighbors as zombie masters. The 1932 movie White Zombie features Bela Lugosi as a mill owner whose workers are zombies.

These associations go some way to explaining why zombies and vampires are among the monsters that concern David McNally in his timely and engaging book, Monsters of the Market: Zombies, Vampires, and Global Capitalism, available in paperback from Haymarket Press. McNally affirms that vampires and zombies "need to be thought conjointly, as interconnected moments of the monstrous dialectic of modernity. … the vampire and the zombie are doubles, linked poles of the split society. If vampires are the dreaded beings who might possess us and turn us into their docile servants, zombies represent our haunted self-image, warning us that we might already be lifeless, disempowered agents of alien powers” (253). McNally has little to say about the flesh-eating ghouls of George Romero's movies, and nothing at all to say about the sparkly vampires of Stephanie Meyer's Twilight or their ancestors in the suffering aristocrats of Anne Rice stories, though his argument has provocative implications for understanding these figures.

Instead, McNally addresses the ways that corporeal horror emerges from the nature of capitalism, including from the denigration of the physical inherent in the notion of abstract labor and of value as an abstraction from the physical form of any commodity. McNally locates the emergence of corporeal horror in historical eras of enclosure and the fragmentation of space and the body. The first of his three long central chapters surveys the history of early modern Britain, the process of the enclosures of common land and privatization of common resources, and the use of public dissection and anatomy as punishments for the poor. People were cut off from access to land, and thus forced to become wage workers, detached parts, as in the expression "factory hands." Those who resisted the market were criminalized for "stealing" the very things to which the common folk had once had recognized rights. Fears of graverobbers and protests at the gallows in sixteenth, seventeenth, and eighteenth century England came about in part because the bodies of those who were executed were used for public dissections, in a days-long spectacle that McNally notes served not scientific exploration but as "a civic display of bourgeois rule enacted on the bodies of paupers and criminals, a ritual designed to inscribe social control over the bodies of the laboring poor" (28). The relevant monster in this chapter is Mary Shelley's Frankenstein, notably quite different from his cinematic incarnations because he not only speaks, but speaks eloquently, and the novel ends with a successful rebellion by a group of sailors against their captain.

The third chapter of Monsters of the Market surveys recent anthropological work on the stories of witchcraft, vampires, zombies, and other body horror in parts of the world more recently drawn into the globalizing capitalist process, particularly sub-Saharan Africa. For instance, Nigerian cinema—Nollywood—is now the world's third-largest film industry, and has produced hundreds of voodoo-horror movies that turn on stories of blood sacrifice and ritual dismemberment in the interests of accumulation. Drawing on the work of historian Luise White, who has noted that "many of the African terms that denote vampires derive from words used for specific groups who performed highly-regimented work routines" (196), McNally concurs that the twentieth-century African tales of vampires and other monsters are ways of trying to understand the mysteries of capitalist relations, in which land is enclosed, privatized, and commodified; time as well as space is fragmented and regularized; and individualism and market relations supplant traditional systems of kinship and community.

In between these two chapters, McNally reads Marx's use of gothic metaphors as crucial to his account of capitalism as an occult system, one that makes work invisible. In non-capitalist class societies, the appropriation of wealth by the ruling class is evident: peasants and others hand over part of their labor, their product, or the money-equivalent, in the form of rent or taxes. "But, in bourgeois society, it is capitalists" (or job-creators, as they'd like to be known) "who pay workers, offering them wages as pay for their labor. Yet, this visible exchange conceals the invisible counter-exchange from which capital profits. For, once they purchase labor-power as a commodity, capitalists can squeeze more from it than the value of the wages paid. They do so by obliging laborers to work longer than the time required to produce the value of their wages. Everything beyond this constitutes surplus-labor, to use Marx's terminology, a surplus-value above and beyond the capitalist's costs of production" (144-145). This monstrous exploitation of living labor occurs in the hidden abode of production, where the sale of life-activity as commodified labor-power alienates the workers from themselves. Moreover, not only do "human beings [come to] relate to their life-energies as alienable fragments of personhood, as dead things that can be sold off" (147), but also, "In dividing labor-processes into ever-smaller motions that can be repeated with ever-greater speed, capitalist manufacture anatomizes the laboring body, fixating on specific organs, muscles, and nerves. Capital 'mutilates the worker,' writes Marx" (139).

The value embodied in the manufactured commodity or the commodified service is an abstraction from the things themselves or the concrete labor involved in them. "The capitalist economy thus effects a real abstraction in which products become bearers of an invisible substance (value) and concrete labor becomes the bearer of labor in the abstract" (123). The Latin root of the verb to abstract means literally to "separate, detach, cut off" (123). This abstraction is what Marx calls the secret of the fetishism of commodities, and among the tropes of cutting, dismemberment, disembodiment, and bodily horror woven throughout Marx's account of capitalism and McNally's account of the monsters of the market.

The book's central chapter also contains as clear an account as I've seen of the processes of financialization and the mechanisms of hedge funds, derivatives, credit default swaps, and other mysteries of financial speculation. Stressing that “beneath the esoteric circuits of finance lie material practices of plunder of the world’s resources and its laborers” (171), McNally elucidates the nature of fictitious capital—that which is derived not from the congealed labor of the past but from the possible labor of the future, the interest-bearing capital that hides its detour though work that has not yet been done, surplus value that has not yet been extracted, "claims on future wealth … that may, or may not, be realized" (154).

In making visible these mysteries, tales of vampires and zombies, like Marxist theory, can help us see the truly monstrous nature of capitalism, and in seeing it, move to change it. Theory-heads may be disappointed (not to say annoyed) that McNally dismisses great swathes of twentieth-century thought as "postmodernism" (referring us to an earlier book of his own), similarly rejecting the work of Michel Foucault by erroneously assimilating it to the dualistic body-spirit paradigm that informs the Marxian tradition of critical analysis of capitalism. But Monsters of the Market has much to offer lovers of monster stories interested in their early roots and global resonance, as well as anyone looking for a lucid account of the more mysterious manifestations of capitalism. Not for nothing was Monsters of the Market awarded the Issac Deutscher award for a book ‘which exemplifies the best and most innovative new writing in or about the Marxist tradition’.

Near the end of Monsters of the Market, McNally writes,

Marx saw the key to unions and workers' organization not in their strictly material achievements but, rather, in the spirit of opposition they cultivated. Without struggle, resistance, and international organization, he argued, workers risked becoming 'apathetic, thoughtless, more or less well-fed instruments of production'—in short, zombies who cannot awaken. Until that awakening, monstrous utopia lives on in stories, dreams, music, art, and moments of resistance that prefigure the grotesque movements through which the collective laborer throws off its zombified state in favor of something new, frightening, and beautiful. (266)