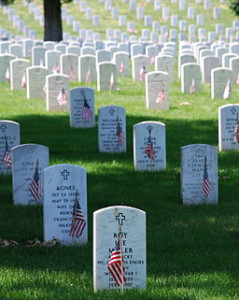 Memorial Day is popularly recognized as our national holiday for remembering those who were killed in wars.

As Barack Obama said the other day, it's a time to "pay tribute to our fallen heroes; and to remember the servicemen and women who cannot be with us this year because they are standing post far from home." He acknowledged that we have often "failed to give them the support they need" and promised that we are now "building a 21st century Department of Veterans Affairs with the largest single-year funding increase in three decades." Certainly veterans need better services and better access to them.

Some right-wing bloggers have been complaining about the President's confusion of Memorial day and Veterans day, but it seems reasonable to consider the larger context of what is being honored. We would not be remembering dead soldiers if they hadn't once been live soldiers.

We would also not be remembering so many dead soldiers if more of them had followed the model of Ehren Watada, the first commisioned officer to refuse deployment to Iraq. Last week he won a legal victory when the Justice Department dropped efforts to retry him after his court martial ended in a mistrial. But the Army still wants to punish him for declaring the Iraq war illegal and immoral, and for having the courage to call out "the deception . . . used to initiate and process this war."

But President Obama did not mention Ehren Watada nor any of the other troops who have refused to serve. He also did not mention the plight of women soldiers, about whom Helen Benedict has written in the current issue of the Nation magazine, noting that

More women have fought and died in Iraq than in all the wars since World War II put together. Over 206,000 have served in the Middle East since March 2003, most of them in Iraq; and over 600 have been wounded and 104 have died in Iraq alone, according to the Department of Defense. In Iraq, one in ten troops is a woman.

More female troops have died in Iraq of [what are called] non-hostile causes than have been killed in battle, and several of those deaths have either been labeled suicides or been left unexplained by the military. Four of those women had earlier been raped, and at least sixteen others died in such suspicious circumstances that retired Army Colonel Ann Wright and Congressman Ike Skelton have called for Congress to compel the military to reopen the cases and investigate, so far to no avail.

The collapsing economy is driving numerous new recruits to the military, 16 to 29 percent of whom are women, depending on the branch of service. It remains to be seen whether these female troops will be as isolated, harassed or abused as their predecessors.

Those who do enlist and survive their service can turn to The Service Women's Action Network, or SWAN, established in 2006 primarily as a support network by and for women of color and LGBT women veterans who returned home from military service without the resources to heal their wounds. SWAN now works to improve the welfare of current U.S. Servicewomen and to assist all women veterans.

But President Obama did not mention the Service Women's Action Network, nor did he mention the "don’t ask, don't tell" policy that requires gay and lesbian military personnel to remain in the closet. He did mention 1776, 1861, and 1944, reminding us of the wars that are remembered for throwing off colonial rule, ending chattel slavery, and defeating Hitler and ending the Holocaust.

He did not remind us of any of the other 230 times the US has used its armed forces abroad, nor any of the over 60 military efforts outside the U.S. since World War II. Those efforts include actions in Greece, Turkey, Korea, Vietnam, Lebanon, Haiti, Cuba, Panama, the Dominincan Republic, Cambodia, Laos, Iran, Libya, Grenada, El Salvador, Honduras, Bolivia, the Philippines, Somalia, Yugoslavia, Bosnia, Saudi Arabia, Yemen, Macedonia, Djibouti, Eritrea, Ethiopia, Jordan, Kenya, Kyrgyzstan, the Seychelles, Tajikistan, Colombia, Pakistan, Sudan, Afghanistan, and Iraq.

He did not mention the military or civilians of other countries who have died in the same actions that killed American soldiers.

As Noam Chomsky recently noted, "Historical amnesia is a dangerous phenomenon, not only because it undermines moral and intellectual integrity, but also because it lays the groundwork for crimes that still lie ahead."

I'd like to close with a poem by Adrienne Rich, that appears in the current issue of the Nation. It's called "Quarto."