Where the Waters Come Together 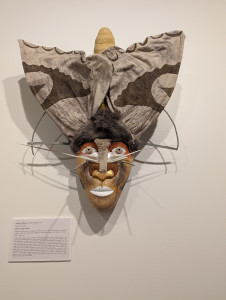 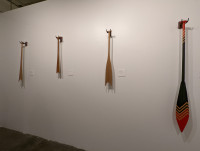 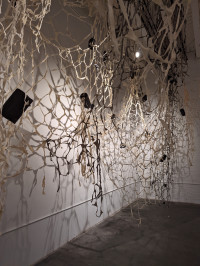 This interview was recorded on a Zoom H2N recorder on May 4, 2022, without masks, in person and engineered by KBOO volunteer Ray Bodwell. https://kboo.fm/blog/55224

From the press release:

The Native Arts and Cultures Foundation is pleased to announce its inaugural exhibition at the Center for Native Arts and Cultures in Portland, Oregon. “Where the Waters Come Together” explores Indigenous perspectives of our relationships with rivers and oceans. The exhibition features Native artists responding to fundamental questions around cultural buoyancy, biodiversity protection, food sources and material necessities, and the realities of the colonial reshaping of traditional access to waterways and shorelines.

Native artists across the country have been responding to social and environmental issues that affect them and their communities. They are drawing increased attention to Native perspectives in shifting a national narrative of invisibility, misunderstanding and misappropriation. Clear in all of this work are our essential relationships to land-base. Through this lens, Native artists in the exhibition employ several mediums, including two and three-dimensional works, installations and multi-media works, moving fluidly between contemporary and traditional practices.

* This event is free and open to the public.

On February 26, 2021, NACF received the gift of the Yale Union Laundry Building, which is on the National Register of Historic Places. NACF’s vision for the Center is to create a “vibrant gathering place” for Indigenous artists as a convening ground for cultural ceremonies and celebrations; as an incubator for Native artists to create; and as a venue for presenting contemporary exhibitions and performances, workshops, and seminars. For NACF, developing the Center will raise the organization’s national profile and help build an even stronger reputation. NACF is doing all the necessary organizational, fundraising, board development, and institutional advancement work to move this project forward. From Ford Foundation President Darren Walker’s perspective, “while this repatriation is only one building, it is also a building block in a larger movement for restorative justice. May it inspire countless others to envision equally powerful ways to empower Native American communities.”

The Yale Union, founded by artists in 2008 and operated as a contemporary art center for ten years, transferred the ownership of their historic building and land to NACF. From the perspective both of NACF and the Yale Union, the gift was viewed as a symbolic repatriation (July 16, 2020 Artnet article by Sarah Cascone) which recognized the historic tribal ownership of the land.[1] Yale Union had acknowledged that it occupied the traditional lands of the Multnomah, Chinook, Kathlamet, Clackamas, Tualatin Kalapuya, Molalla, and other Indigenous peoples.

The idea to transfer the building’s ownership to NACF came in 2018 from Yale Union’s then-executive director Yoko Ott, a beloved curator and champion for Northwest art and artists. Sadly, Ms. Ott died in late 2018. The NACF conducted an in-depth feasibility study with potential funders, including major foundations, Native leaders, and philanthropists; the NACF board gave its approval to the project in late 2019. Likewise, the Yale Union led by its board president Flint Jamison were enthusiastic about the decision.

Barbara started at NACF in 2021 as Vice President of Programs and Partnerships. Barbara has spent the last 15 years working in philanthropy, and was previously the Director of Community Investments for the San Francisco Arts Commission’s. As a 2019 Open Society Racial Equality fellow, Barbara is working to shift narratives and push boundaries around the authentic representation of Indigenous Peoples in the public realm. Barbara received BA’s in Studio Arts and Native American Studies from the University of California, Berkeley and an MA in Museum Studies and an MBA from John F. Kennedy University. She is also a practicing visual artist and uses the arts to engage community, address historical trauma and move policy.

KBOO Radio is a volunteer-run nonprofit, and it needs your money if you are listening.

Joseph Gallivan has been a reporter since 1990. He has covered music for the London Independent, Technology for the New York Post, and arts and culture for the Portland Tribune, where he is currently a Feature Writer. He is the author of two novels, "Oi, Ref!" and "England All Over" which are available on Amazon.com